Why a police uniform doesn't belong in elections.

The culture, training and practices of law enforcement must change. 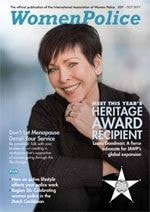 ​
Laura Goodman served in criminal justice for 35 years as a sworn officer (retiring as deputy chief) in major metropolitan police departments, as the Ombudsman for Crime Victims for the State of Minnesota, and finally as the Director of Public Safety for an urban university.

In 1991, Laura received the International Association of Women Police (IAWP) Officer of the Year Award. She immersed herself with IAWP leaders in advancing the mission of the IAWP by growing and improving the organization. Laura was and remains passionate about promoting women in policing nationally and internationally.

After serving in several roles on the Board of Directors, Laura was elected president in 1998.  During her presidency, Laura led the IAWP through a challenging paradigm shift in philosophy from a largely North America perspective to a global outlook in its thinking, strategies, and vision. Under her administration, she brought IAWP’s first board meeting to Brussels, Belgium in conjunction with the European Network of Policewomen's (ENP) tenth anniversary and brought the IAWP and its vision to the Middle East.  There, she met with police leaders and began a long process of information sharing and training.

As president, Laura established “Friends of the IAWP” partnerships with the National Center for Women and Policing (NCWP), the ENP, the Australasian Council of Women and Policing and others. With the NCWP, she helped create Recruiting and Retaining Women: A Self-Assessment Guide for Law Enforcement and participated in national and international think tanks including Changing the Face of Law Enforcement: The Future of Policing, Redesigning Law Enforcement Internal Affairs and other focus groups with women police leaders interested in discovering solutions to common problems facing women in law enforcement.
​
Laura’s current work focuses on increasing the representation of women in police leadership roles, reducing gender-based violence, and teaching police officers victim engagement. She continues to promote the advantages of women in policing and helps to advance the IAWP as a director on the Board of Trustees of the IAWP.

What would it take to really change the police culture?

Ramsey County missed a chance to lead with sheriff appointment